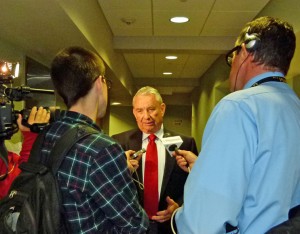 U.S. Senate candidate Tommy Thompson dropped his nominating papers off at the Government Accountability Board on Wednesday. Thompson, who worked with public sector unions in Wisconsin during his years as governor, was asked whether he thinks opinions have changed towards public employees. “It’s the benefits that they get, and the fact that because of changing conditions of our time, everybody feels that it’s only equitable that the public employees pay part of their salaries towards retirement and health care,” he said.

Thompson said his direction is clear, if he’s elected to the U.S. Senate. “The first thing we have to do is introduce a balanced budget amendment, we’ve got to get our fiscal house in control,” he said. “Second thing is to redo Obamacare so that it’s workable. The Supreme Court will probably rule that it’s unconstitutional. If they don’t we’ll have to repeal it.”

Thompson is in a contentious four-way primary with former congressman Mark Neumann, Assembly Speaker Jeff Fitzgerald and businessman Eric Hovde. The winner will face Democratic congresswoman Tammy Baldwin in November. “People want somebody that can make government work,” he said. “Who better than I? I’ve shown everybody in this state that I can make government work, and that’s what people really want.”