You are here: Home / News / Walker moves into campaign mode 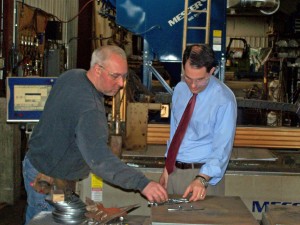 With the primary out of the way, Governor Scott Walker is moving into full campaign mode. Walker will face Milwaukee Mayor and Democratic nominee Tom Barrett is less than four weeks, in what will be a rematch of the 2010 election.

Governor Walker hit the campaign trail Wednesday in meetings with manufacturers from across the state. He stressed the importance of those businesses in helping the state’s job market recover, and also highlighted how his administration has worked to give them the financial tools they need to expand through tax credits and other incentives.

Barrett has criticized Walker’s tax credits for not being tied to actual job creation, saying they create “winners and losers” with no accountability. Walker defended those polices, saying Barrett’s position would amount to a tax increase on businesses.

During a stop at a Waunakee-based steel manufacturer Wednesday, the governor said he’s encouraged by the over 640,000 votes he received in Tuesday’s Republican primary. Walker says it shows a lot of taxpayers wanted to speak out at the ballot box, rather than with a “bullhorn or through a sign at a protest.”

Walker believes many voters think his policies have been necessary to get the state’s financial situation back under control. He believes the majority will decide to keep him in office because he has been thinking about the next generation.

The governor admits the weeks leading up the recall will be filled with attacks, but says it’s not any different than what he’s faced in the last 15 months. Walker says almost every ad targeting him so far has been based on a personal attack, although “he’s not crying about it.”