You are here: Home / News / Three die in washed-out road 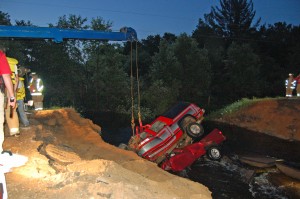 Patrol Captain Jim Hirsh with the Clark County Sheriff’s Department says a pick-up truck with two people inside crashed into the hole near Greenwood, and then another vehicle with one person — unaware of the situation — also crashed into the void. “They were traveling at highway speeds; that area of the roadway is 55 mph. Because of the hole, they basically drove into the hole and struck the far side of the hole.”

It’s a rural highway, so there are no street lights in that area illuminating the roadway. Hirsch says a passer-by discovered the wreckage — after narrowly avoiding the same tragedy himself — and called 9-1-1 around 1:35 this morning. All three victims were pronounced dead at the scene.

Clark County had nearly two inches of rain in recent days. The three deaths were the first in Wisconsin to be blamed on the massive rain storms that dumped up to 6 1/2 inches of rain in the far north this week, and up to 10 inches in nearby Duluth Minnesota.

The Greenwood Fire and Ambulance, Marshfield Fire and Rescue and Spirit of Marshfield all assisted at the scene. The Sheriff’s department is continuing the investigation. Names are being withheld pending notification of family.

UPDATE: Clark County Sheriff’s Department says the initial investigation indicates a northbound Ford Ranger truck crashed first into the wash out. These victims are identified as Thomas J. Jurceka, 56, and Susan Jurceka, 57, both of Milwaukee. It appears the second vehicle, a Chevrolet Suburban, driven by Mary A. Malinowski, 24, Thorp, was also northbound when it crashed in the same area. The Suburban landed directly on top of the Jurceka vehicle. Seatbelts were used in the Jurceka vehicle and speed does not appear to be a factor in this crash. There were no other survivors in the vehicles.