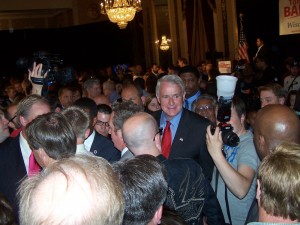 Despite Democrats saying they would wait until every vote was counted, Milwaukee Mayor Tom Barrett took the stage just two hours after the polls closed Tuesday night to announce he was conceding the race to Governor Scott Walker. The Democratic candidate was met by gasps and even boos from supporters when he told them he had called Governor Walker to congratulate him on winning the race.

It’s the second time in two years Barrett has lost to Walker, with unofficial returns showing an even wider margin of victory this time for the embattled governor. Despite that, Barrett says it was an amazing experience and offered thanks to those who helped mobilize the recall and supported his campaign.

Democratic recall candidate for Lt. Governor Mahlon Mitchell also thanked the crowd for their hard work. Mitchell lost to Lt. Governor Rebecca Kleefisch, but says he will not give up and will “fight like hell” to make sure Democrats win the state for President Obama this coming November.

With race capping off 16 months of political upheaval in Wisconsin, Barrett says it’s now time for both sides to work together. He says the state remains deeply divided, “but it’s up to all of us…our side and their side…to listen to each other and to try to do what is right for everyone.”