You are here: Home / News / Brat summit has naysayers 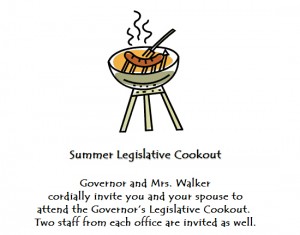 Governor Scott Walker will host legislators from both parties for brats and beer – but some are  spurning the offer. Republican state Representative Steve Nass will be a no-show today, blaming comments from state Democratic Party chair Mike Tate, and state Senator Fred Risser. “Mike Tate mentioned that “Walker will see the inside of a jail cell before he sees another term,” and Fred Risser basically said the governor is arrogant and the Democrats behavior will not change until Republicans change their policies,” said Nass.

Tate made his comments during the state Democratic party convention in Appleton, Risser in an interview with WIBA. “Name calling, bullying, just like children on a playground,” said Nass. “What needs to happen is for the Democratic leadership, Peter Barca and Mark Miller, to disavow these vile comments.”

Also not showing up, Representative Mark Pocan of Madison. “We have tried to reach out to the governor for the past 16 months,” said Pocan. “He’s pretty much ignored our requests, and even ignores our letters when we send them to him. We need something far more substantive that brats and beer.”

Walker will be hosting those lawmakers who show up, from 3:00 to 5:00 at the governor’s residence in Maple Bluff. The event is billed as a “Summer Legislative Cookout” in the invitation sent to legislators. “I think it will be more of an ice breaker,” said Miller. “He made the pledge on election night that he was going to change and govern in a way that served all the people of the state of Wisconsin, including those who voted against him. That’s going to require some fairly significant changes in behavior, so maybe he’ll outline how he’s going to fulfill that pledge.”

“The governor’s got to change his attitude. He didn’t bother to even communicate with the minority party,” said Risser. “I really think this brat summit is really lining up to be nothing more than a photo-op. Substance is what people want, not just having us get together and have a brat,” said Pocan.

“The very next day they (Democrats) most likely will be out on the trail again, spewing their venom and creating chaos,” said Nass. “It’ll be a two-hour, fake presentation about “kumbaya” and “work together.” And that’s all it is. It’s fake.”