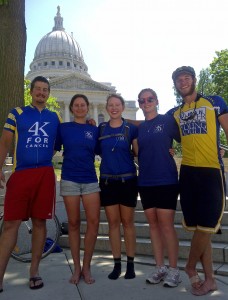 A group of young cyclists on a cross-country cancer fund-raising ride are taking a break in Madison. The five college age riders arrived on Tuesday, after setting out from Baltimore on May 27th. Katy Jackson says the ride from Milwaukee was a challenging one. “The hot head winds were not pleasant,” she says. “But we’ve been doing all right, and we all pick each other up when we’re down. It’s been incredible.”

Each of the riders on the 4K for Cancer ride has a connection to a cancer victim. Casey Gannon says that helps keep them going. “Just seeing all the riders, seeing how hard they actually fight for the people they’re personally riding for, and the ones we meet along the way. That motivation really pushes as through those tough days,” he explains. The riders, says Gannon, average 70 to 80 miles a day.

“It’s unbelievable how generous complete strangers can be,” says Sam Berry. “There’s just so much love and willingness to help other people. That’s something I’ve learned on this trip that I really didn’t understand before.”

While in Madison, they’re looking to sample some local favorites. “Next on the menu is cheese curds,” says Berry. “And custard,” adds Gannon.

Each rider is pledged to raise a minimum of $4500 for the four thousand mile ride, with a goal of raising half a million dollars. Riders are participating on three routes, ending in Seattle, Portland and San Francisco on August 4th. The ride is organized by the Ulman Cancer Fund for Young Adults. Last year’s ride raised enough funds to open a patient navigation program at Johns Hopkins Hospital, to support young adults with cancer.