You are here: Home / News / Convention kudos for Barrett (AUDIO) 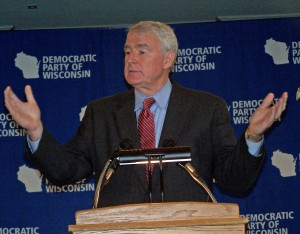 There was plenty of praise for Tom Barrett from the party faithful, during the weekend’s Democratic state convention in Appleton. The Milwaukee mayor and unsuccessful recall candidate for governor attended drew thanks from fellow Democrats like Congressman Ron Kind. “He was willing to subject himself – offer himself up – for the residents of the state of Wisconsin, because he felt we deserved better,” said Kind.

“I got into this race, because I felt that I could not stand by and watch what was happening to our state,” said Barrett, who explained his philosophy of what Democrats stand for. “I really think that there is a reason we are here, not just a reason that we are here in Appleton, but that there is a reason we are on this Earth. It is to make sure that we treat others with dignity and respect. And I believe that is what Democrats stand for.”

U.S. Senator Herb Kohl, making his final appearance at a state convention while in office, said he was “terribly proud” of Barrett, and that the mayor leads their mutual hometown “with inclusion and integrity.” 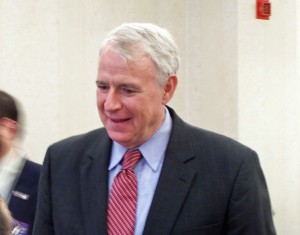 “This is somebody who picked up the banner, and fought like hell for this party when he didn’t have to, when he knew the odds,” said DPW chair Mike Tate. “He did everything he could, on behalf of all of us.”