You are here: Home / News / Democrats dig in 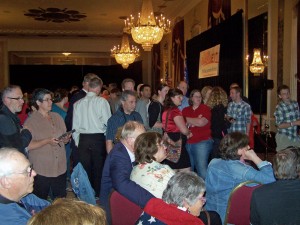 DPW Chairman Mike Tate took the stage at Barrett’s election night headquarters in Milwaukee to rally the crowd, while TV monitors around the room showed news networks projecting a win for Walker. Tate says there are far too many reports of people waiting in line to vote an hour after the polls closed for them to believe enough votes have been counted.

Several of those still open polling places were in Milwaukee, where lines still stretched out the doors after 9:30pm. State Senator Jon Erpenbach (D-Middleton) says “before anybody decides to call it an evening, I think we should count all of the votes.”

A spokesman with the Barrett campaign says it makes no sense to call the election with so many votes still uncounted, and they are committed to holding out hope that later returns will pull Barrett ahead of Walker.