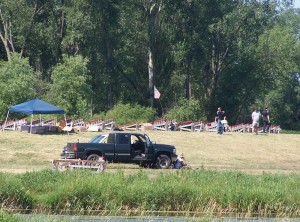 Workers set up for Madison’s Rhythm and Booms celebration.

Despite a lengthy period of hot and dry weather in southern Wisconsin, Madison is moving ahead with plans to set off one of the largest fireworks displays in the state.

Nearly 250,000 people attend the annual Rhythm and Booms festival at Madison’s Warner Park, when it’s held the weekend before the 4th of July holiday. A recent spell of dry weather has raised concerns about the celebration though, because of the potential fire dangers. This year’s event will take place this coming Saturday, June 30th.

Event officials announced Tuesday they feel confident the show can move ahead as planned, although precautions will be taken to ensure public safety. Madison Fire Chief Steven Davis says they will have extra crews out watching for any fires that could be sparked by falling debris. The department also plans to work with the company setting up the display to identify the likely fallout area before the show starts, so firefighters can wet down grass in the area.

Madison Fireworks Fund President Terry Kelly says they are looking forward to another successful event and they will do everything they can to make sure it remains safe. He notes that they have dealt with dry conditions in previous years during the show’s 20 year history.

As Madison decides to move ahead with its display, other communities in dried out regions of the state are not taking a chances. Several have already canceled their fireworks ahead of the holiday, citing concerns about the potential fire dangers.