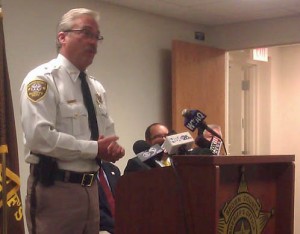 Brown County investigators bust a liquor store for fraud against the state assistance program. Sheriff John Gossage said Beach Road Liquor in Green Bay would let people buy alcohol and tobacco, using the Qwest debit card they got through the Food Share program. The store would charge twice the actual amount of, for example, forty dollars of goods. “They in turn would take the forty dollars cash to the recipient, take their Qwest card along with their pin number and go to other various stores throughout Brown County, and purchase items with that pin illegally, at twice the value of what they paid the cash for,” explained Gossage during a Tuesday press conference. “So, they’d go purchase eight dollars worth of items, and then give the card back to that individual when they came back the next day.”

During the last month alone there were more than 1200 transactions at Beach Road Liquor, worth more than $10,000, making it one of the biggest food share fraud cases in the state. “When people commit fraud, it hurts those that are truly in need, and it takes additional time and resources from our caseworkers, that they could be spending on those that truly need the assistance,” said Jenny Hoffman is with Brown County Human Services.

Hoffman said department staffers spotted the issue. Investigators are seeking several felony charges against the store owner and three family members. The card users could also face criminal charges and lose their benefits for a year.