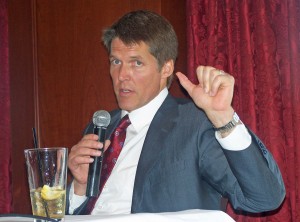 A Republican U.S. Senate candidate says a recent comment about how the poor are covered in the media was taken out of context.

Businessman Eric Hovde drew fire from the Huffington Post after he told a forum in Brookfield that he was tired of seeing sob stories about the poor in the media. He urged reporters to spend more time covering problems that could be devastating to the nation.

The GOP Senate hopeful says it’s a disingenuous attack that focused on one part of his speech, which focused largely on the need for reforms on Wall Street and the state of the economy. He says it’s “like you can’t even touch the subject of entitlements without being completely attacked.”

During a wispolitics.com forum in Madison Thursday, Hovde said he regrets the comment because of how it’s being used to portray him. He says those trying to paint him as against the poor are ignoring his years of charitable work.

Hovde says he’s given “beyond what anybody normally does” in time, money and effort to help the poor, and the attack shows just how difficult it has become to have an honest discussion in this country about things that are fundamentally broken.

Hovde is one of four Republicans seeking the nomination in the US Senate race.