Allan Kiprono raced through the heat in total dominance, winning his second consecutive Bellin 10k run.  The Kenyan crossed the 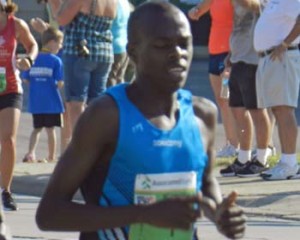 finish line in 29 minutes, 4 seconds to win the 36th annual event.  He finished more than a minute ahead of second place finisher Lani Rutto Kiplagat.

Kiprono beat Kiplagat by 35-seconds in last years race.  This time, the margin was 1 minute and 1 second.

Kiprono said he hopes to return to Green Bay next year to defend his back to back titles.

The top four finishers were identical to the order of finish of last year.  Kiprono, Kiplagat, John Korir and Seymour native Tyler Sigl all crossed the finish line in the same order as they did in 2011.

Joan Samuelson, who won the first ever women’s Olympic marathon in 1984, finished sixth overall in the women’s division.  Her time was good enough to break the national record for the 10k in the 55-59 women’s age group with a time of 38:26.