You are here: Home / News / Mailer makes many mad 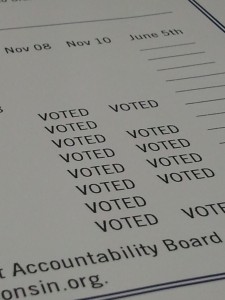 A lot of angry voters are calling the state elections agency complaining about a direct-mail flier. The Greater Wisconsin Committee sent out the flier in their effort to get more people to the polls. The mailer lists the names and addresses of the recipient’s neighbors, as well as whether they voted in the 2008 and 2010 General Elections. It boldly states, “Scott Walker won in 2010 because too many people stayed home!”

The information came from the Government Accountability Board, but the GAB did not send out the flier. Kevin Kennedy, the Board’s Director, points out voter records are public records. He says state law requires the GAB to sell certain data upon request.

Many callers are upset that this information has been released, but there is no state law that prohibits such practices. The Greater Wisconsin Committee also pointed out on that flier, “After the June 5th election, public records will tell everyone who voted and who didn’t.”

The liberal group that sent out the mailers paid $12,500 for the list. Voters’ date of birth and other personal information, such as driver license or state ID number, or the last four digits of a Social Security number, are never sold, according to the GAB.