You are here: Home / News / Petrowski sworn in to Senate 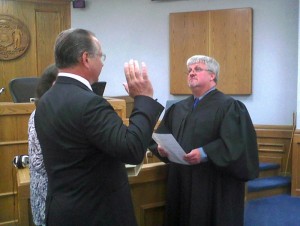 A judge administers the oath of office for Sen. Petrowski (PHOTO: WSAU)

A former state Representative has moved on to his new job in the Senate. Republican Jerry Petrowski (R-Marathon) was officially sworn in Tuesday as the new state Senator for the 29th District.

Petrowski says the biggest change will likely be the size of the district. “I used to have 23 towns, 9 villages and one city. Now I have 132 total. But I think it’ll give me the opportunity to work with a lot more people.”

He says that he’ll start making the trips out to visit all those places soon, and joked about having a lot more meetings to attend.

Petrowski also called on lawmakers to get back to discussions in the Senate, and said he’ll work to help generate discourse. “I think you create that atmosphere by one person at a time, building friendships, building relationships.”

Petrowski won the race for the 29th Senate District by defeating state Representative Donna Seidel during the recall elections earlier this month. The seat was previously held by Senator Pam Galloway, who resigned this spring after a recall election was ordered against her.