You are here: Home / Sports / Simpson wins 1st US Open

If you wanted to watch the U.S. Open golf championships this past weekend, 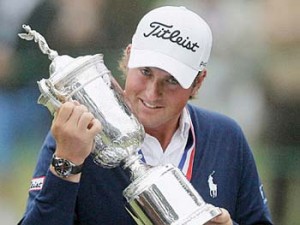 you certainly were afforded the opportunity.

ESPN and NBC split coverage on Thursday and Friday and then because the tournament was held on the West Coast in San Francisco, NBC provided coverage of the event from 3 to 9pm on Saturday and 3 to beyond 9pm Sunday.

It all ended with Webb Simpson picking up his first major title since arriving on the PGA Tour.  Simpson birdied 4 holes in a 5 hole stretch as he made the turn to beat Michael Thompson and Graeme McDowell by 1-shot.

Of the last 18 players to tee off in the final round, Simpson was the only one to break par.  It was also the 3rd time in the last seven years that no one broke par in the U.S. Open overall.

Tiger Woods has never won a major when trailing going into the last round and he kept that streak going.  Woods started his final round by going bogey, bogey and double bogey to quickly fall out of contention.  He finished 7-over par, tied for 21st.

Madison’s Steve Sticker shot a 1-under-part 69 and finished 6 over par, tied for 15th.

Jim Furyk started the final round with the lead but picked a bad time to shoot his worst round of the tournament.  He finished 4-over par 74, 2-shots off the lead and missed a chance, at age 42, to win another U.S. Open.

17-year-old amateur Beau Hossler entered the final day looking to stay in the hunt for the U.S. Open title, as well as finish as the top amateur at the Open.  Hossler lost on both counts.  Hossler shot a 6-over par 76 to finish tied for 29th.  he was also passed up by future Texas University teammate Jordan Spieth in the race for the top amateur.  Spieth shot an even par 70 yesterday to finish at 7-over par, 2-shots behind Spieth.

A number of top golfers missed the cut, like Rory McIlroy, Bubba Watson and Zach Johnson among others.  Phil Mickelson blew up on the final day to continue his poor play of late.  Mickelson shot a final round 78 on Sunday to finish 16-shots over par.