You are here: Home / News / Staying solid on the Square 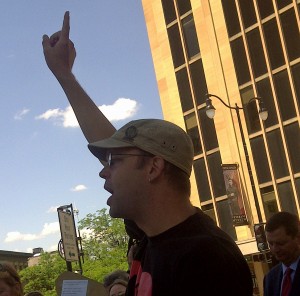 A familiar protest on the Capitol Square in Madison will be scaling back. Solidarity Singers organizer Chris Reeder says they’ve been as good as their word – as Wednesday marked the 384th noon hour sing along by the anti-Walker group. “Sixty-five weeks ago, we said we were going to be here signing the day after the election, and we are still here,” Reeder said to cheers.

The singers were finding reason to celebrate – Democrat John Lehman’s apparent win in the Racine area state Senate recall. “That means we’ve flipped the Senate over the last 16 months,” Reeder said. “It’s a little hard for us to see it right now, through the losses, but that’s a huge accomplishment . . . and it stops some of the more extremist policies from going through at this point.” Reeder said the sing along will continue as long as Governor Walker is in office – but from now on, only on Fridays.