Todd Faircloth won the Mississippi River Rumble on Sunday for his 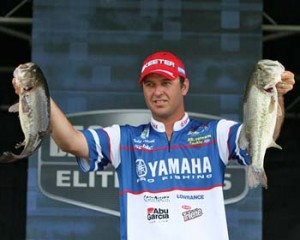 This week, the Bassmaster Elite Series is in Green Bay, June 28 – July 1.  It’s the seventh of its eight professional bas fishing tournaments scheduled in 2012.

The contest pits 99 of the top bass anglers in the world against one another, including fishing legend Kevin VanDam and 2012 Bassmaster Classic champion Chris Lane.