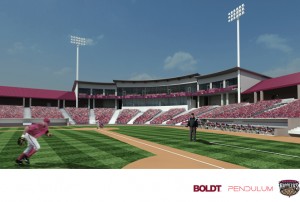 The stadium will undergo its first major renovation since its initial construction, following the current season.

The major addition to the stadium will be a second level behind home plate that is to include six suites and a club level with seating for 250.  The new club level will be available to groups and individual fans during games.  Additionally, the club level will double as banquet space during non-baseball events and may be used 365 days a year.

The renovations will also include the following:

— An expanded team store that will double the size of the current store
— Expansion of two concession stands that will increase points of sale by 50%
— Additional restrooms that will double the number currently available
— An expanded customer service center
— A larger administrative office
— An improved home clubhouse that will include a new player lounge, a new
meeting area, and expansions into the weight room, training room and
coaches offices
— Additional storage areas for team, food and beverage, and merchandise
— Replacing the current cement block facade of the stadium

The Timber Rattlers became the Midwest League affiliate of the Milwaukee Brewers for the 2009 season.  Since that time, attendance at Time Warner Cable Field at Fox Cities Stadium has risen by 25% and the fan base of the Timber Rattlers has grown to include a greater portion of Wisconsin.