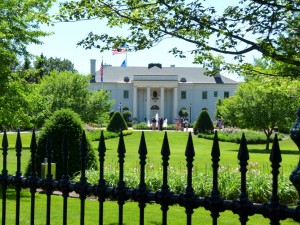 Just one week after the gubernatorial recall election on June 5th, members of both political parties break bread at the Executive Residence.

Poplar Democrat Bob Jauch says it was an opportunity to informally talk about serious matters, but mostly, people were enjoying the day with friends at the so-called brat summit. “There was no arguing; there was nobody bad-mouthing each other. We were catching up, talking about families, and enjoying the good weather.”

In extending an olive branch across the political aisle in what has become a polarized atmosphere stemming from the changes to collective bargaining in February of last year, Governor Scott Walker personally serves up what’s been called “sausage of reconciliation” at the Governor’s Mansion, including brats, burgers, and beer.

Janesville Democrat Tim Cullen says it was a small step, but a good step. In fact, many lawmakers expressed the same sentiment. It’s a start. Cullen says it was a great chance for lawmakers to get to know one another outside the work environment, like the old days. “A chance to talk to people and find out that they actually have other lives — they have kids, they have grand kids, they pay property taxes, and they have other problems. So, get to know them as a human being, it doesn’t mean you have to agree with them … but it doesn’t mean that we can’t be civil to each other.”

Cullen made that statement on civility while about a dozen protesters shouted just outside the gates of the mansion, where reporters met up with lawmakers before and after attending the barbeque. Security kept a close watch on the comings and goings of lawmakers, their staff, Walker’s cabinet members, and the demonstrators. West Bend Republican Glenn Grothman’s arrival swelled the chorus of protests, with shouts, boos and name-calling.

Richland Center Republican Dale Schultz is optimistic. He says Wisconsinites are looking to lawmakers to show some leadership and maturity, and, he says, he’s doing his part. “There’s no point in being anything other but an optimist in life and we need to find a way to move ahead.”

Madison Democrat Brett Hulsey is happy … for now. “The question is not what happened today, but what’s gonna happen different tomorrow, and are we gonna see real progress or more political B.S.”

Hulsey says the brat summit was very casual, “probably something that should have happened a year and a half ago.”

Lawmakers we spoke to say there was no real discussion about a potential special session of the legislature, but mentioned plenty of things they’d like to address in the Capitol. Jauch stressed it was simply a social gathering; even so, a helicopter from Milwaukee TV circled the grounds and at least one photojournalist got some close-up pictures of the peacemaking picnic while sitting in a boat on Lake Mendota.

Agency heads in Walker’s Administration also attended the cookout. Assembly Majority Leader Scott Suder praises the governor for suggesting and organizing the “great bipartisan event.” He says it is a “very good first step after the recalls to come together and find some common ground.” Suder hopes more such events will occur in the future.

Two dozen Wisconsin employers made donations to the event, which was not open to the media. Governor Walker’s office said in a statement beforehand: In an effort to provide a relaxed environment for lawmakers to socialize with each other and with the Governor, the event will not be open to the media.