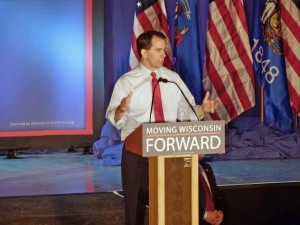 Scott Walker becomes the first governor in U.S. history to survive a recall election against him. Now, he says, “It’s time to move on and move forward in Wisconsin.”

Political pundits had said voter turnout would be the key to victory in this contentious campaign, whose candidates had been neck and neck in most polls leading up to June 5. Lt. Governor Rebecca Kleefisch survived her recall attempt, too. She thanked people who voted for the first time.

It started in February of 2011, when Governor Walker introduced a budget adjustment bill that included collective bargaining restrictions for most public employees in his effort to balance the two-year budget. Opponents called it a power grab.

After a year and a half of political turmoil, and record campaign spending, the 44-year-old Walker becomes the first Wisconsin governor to win an election twice in the same term. Walker has often said during his campaign that a vote for him is a vote for courage, referencing his tough choices to eliminate the $3.6 billion deficit.

Milwaukee Mayor Tom Barrett, Walker’s Democratic challenger, has pledged to end what he called “the civil war in Wisconsin” that has divided the state, pitting neighbor against neighbor. Barrett conceded the race just two hours after the polls closed. Unofficial returns show a wider margin of victory for Walker in this race than the 5 percent he had in the 2010 gubernatorial election.

National Republican Party Chair Reince Priebus was confident Walker would take the win. “This is an election about the direction of this state … whether we should spend more money than we take in.” 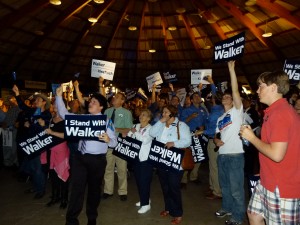 State Representative Robin Vos (R-Rochester), Republican co-chair of the Joint Finance Committee, says the silent majority made their voices heard. “Here we are tonight vindicated … tonight the sounds were deafening.”

Only two governors in US history have been recalled from office – Governor Gray Davis (D-CA) in 2003, and Governor Lynn Frazier (R-ND) in 1921. This historic election is being viewed as one of the most significant races in the country at this moment in time, second only to the presidential election in November. Walker will be up for reelection in 2014.