You are here: Home / News / AirVenture gets under way 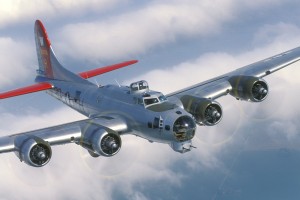 Boeing B-17 is a featured attraction at AirVenture 2012 (PHOTO: owned by EAA’s AirVenture)

Thousands of aircraft dot the grounds of Wittman Regional Airport in Oshkosh — from the smallest ultralight to the huge military cargo planes to large passenger jetliners and everything in-between. “The aircraft come from all over the world.” EAA spokesman Dick Knapinski says, “In all about 10,000 airplanes will come to the area.”

Knapinksi says more than 700 exhibitors are set up at AirVenture 2012, as the Experimental Aircraft Association welcomes about 1/2 million aviation enthusiasts from Wisconsin, across the nation, and 60 countries.

Knapinski explains, this year’s big attraction is the “Greatest Generation in the Air.” He says, “It’s getting harder and harder to put these kinds of reunions of WWII aviators together, but this year we’re going to have close to 400 warbird airplanes; we’re going to have the Tuskegee Airmen, the Doolittle Raiders, and some of those other WWII groups here, as well.” He says the show will honor the “greatest generation” and what they’ve done “not only in aviation history, but in world history, as well.”

Visitors to the 60th annual fly-in convention can tour the AirVenture museum included in the cost of admission, and it’s air-conditioned. Organizers realize with an outdoor event, festival-goers are beholden to the weather, and they do have contingency plans — whether heat or rain.