You are here: Home / Badgers / Badger women’s hockey schedule is out 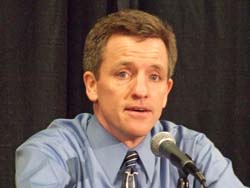 La Bahn Arena for the upcoming season, starting with the home opener set for Oct. 19.

The Badgers women open the 2012-13 season with a trip to conference rival Minnesota State on Sept. 28-29.

The Badgers will play their first six games on the road with trips to St. Louis to face Lindenwood for a pair of games before heading to Duluth to face Minnesota Duluth on Oct. 13-14.

The Badgers finally return hom to play their first game in La Bahn Arena on Oct. 19 against Bemidji State.  The second date of that series will be Sunday, Oct. 21st.

The final home series of the year sees Minnesota Duluth visiting Madison, Feb. 16-17.  The Badgers then travel to Bemidji State to close out the regular season.

The first round of the 2013 WCHA Playoffs will be held March 1-3, in the similar best-of-three format with the higher seed hosting.

The 2013 Women’s Frozen Four will be held on March 22 & 24 at Ridder Arena at the University of Minnesota.