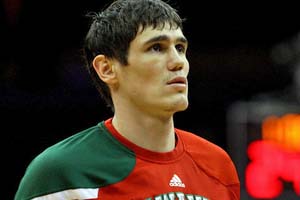 a multiyear deal on Thursday.

Ilyasova has appeared in 267 games (120 starts) in his NBA career.  He was drafted by the Bucks with the 36th overall pick in the second round of the 2005 NBA Draft.

AUDIO: Scott Skiles on the deal and expectations that follow :21

After spending time in the NBA Development league and 2 seasons overseas, Ilyasova returned to the Bucks for the 2009-10 season.  That first season, Ilyasova averaged 10.4 points and 6.4 rebounds in helping the Bucks make the playoffs.