Na Yeon Choi started her final round at Blackwolf Run with a 6-shot lead.  That 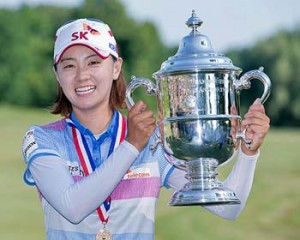 lead dipped to 2-strokes after a triple-bogey on the 10th hole.  But Choi recovered and went on to win the 67th U.S. Women’s Open, by 4-shots over fellow South Korean Amy Yang.

AUDIO: Choi says she’s proud of herself for staying patient :08

AUDIO: Choi said this will probably sink in later :12

Choi and Yang were the only two golfers to finish under par over 4-rounds of golf at Blackwolf Run.

Paula Creamer was the top American finisher.  She tied for 7th.