You are here: Home / News / Dems call on Wanggaard to concede (AUDIO) 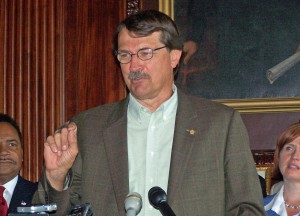 Where’s Van Wanggaard? The Republican state Senator has been “extremely inconspicuous” since the June 5th recall in the 21st District, according to his opponent. Democrat John Lehman said Wanggaard wasn’t at Racine’s annual Independence Day parade. “There was a spot reserved in the parade,” said Lehman. “So I went to the parade and set on the curb, and waited for my senator to walk by. And he didn’t make it.”

“Van is right now with his family, reviewing the mountains of evidence of irregularities in Racine,” said Scott Kelly, a Wanggaard staffer serving as campaign spokesman. “He’s a former investigator. He investigates evidence and sees where that leads him, and that’s what he’s doing now. The Democrats willingness to look past the potentially fraudulent activities is very concerning.”

State Senator Mark Miller, leader of Democrats in the chamber, charged that Republican-passed legislation has made it more difficult for elections clerks to administer elections, and that Republicans now appear ready to challenge election results based on human error which they are responsible for creating. “The GAB affirmed that human errors do not disenfranchise voters, nor should they. Going to court is a delay, in an attempt to steal this election.” He called on Wanggaard to concede, which would give Democrats the majority in the Senate, although there are no legislative floor sessions between now and elections in November.

Lehman, who appeared at a Capitol press availability with Miller and the rest of the Senate’s Democrats on Thursday, noted that the 21st District has a history of close elections. “But for somebody to stretch that, and to say that we want to keep talking about this as some kind of a fraudulent situation, is just really inappropriate,” he said. “The Wanggaard campaign has insulted Racine. It has insulted our Republican county clerk, Wendy Christianson, and all the hardworking people” who staffed the polls.

“We don’t have any problem with how Wendy ran the recount or the election in the county,” said Kelly. “The city has issues. And you don’t see these issues in, literally, any other municipality in the 21st Senate district.” Potentially fraudulent activities, according to Kelly, include ballot bags in 7 of 36 wards in the city of Racine which were never closed, partially closed, or sealed and reopened. “There are two ongoing police investigations that I know of, and possibly more,” said Kelly. The Government Accountability Board pointed out that the number of ballots matches the number of voters in the 21st. “That does seem consistent,” Kelly said. “But are they the right votes?”