You are here: Home / News / Getting ready for EAA AirVenture 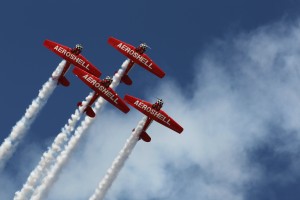 Wisconsin is under a drought emergency, but the high temps and dry conditions are having no negative impact on preparations for AirVenture in Oshkosh.

The Experimental Aircraft Association’s Dick Knapinski says everything is going according to plan as they prepare for worldwide attention. “The preparations have gone very well. The dry weather this summer may not have benefited crops, but it certainly benefits outdoor events because our staff and volunteers and contractors have been able to set up the hundreds of tents and all the things necessary to have a big outdoor event.”

Some airplanes have already arrived, Knapinski says, with the first aircraft flying in on Tuesday — and they keep coming. “And, of course, on Saturday and Sunday will be the big influx of aircraft when we’ll have thousands of aircraft parked here at Wittman Regional Airport and really make a phenomenal scene if you look over the field of airplanes.”

In fact, there are several days when Wittman Regional Airport in Oshkosh becomes the busiest airport in the world. “We’ll have as many as 3,200 aircraft movements — that means take offs and landings — within a 14-hour day, which is more than O’Hare (Chicago) or Hartsfield in Atlanta has in a full 24-hour day.”

More than 10,000 aircraft and hundreds of thousands of attendees will descend on Oshkosh for AirVenture 2012.

Knapinski says, what’s most unique about the event is that it is not just purely an aviation event. There’s something for everyone, including KidVenture, music, fireworks, and the “Wall of Fire.”