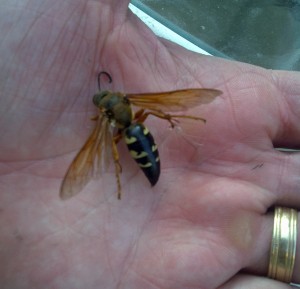 Here’s the story on a scary-looking new insect arrival in Wisconsin. Maybe you’ve been alarmed by the sight of a really big wasp buzzing around your backyard this summer. UW entomologist Phil Pelliterri explainsed that the cicada killer wasps are not an exotic invasive species, but rather recent migrants to the state. “To be honest, we’ve got a number of creatures that do this,” he said. “It’s a native insect. When I was a student here, you’d have to go to Indianapolis to find them. I think because of the lack of significant cold, we’re finding they’ve been able to extend their range north,” Pelliterri said.

While the big black and yellow wasps can be an alarming sight, Pelliterri said their solitary nature makes stings rare. “Critters that live in colonies, like honeybees and bumblebees, or yellow jackets, they live in a nest, and they’ll do anything to defend the nest, so they’re rather aggressive.” Female cicada killer wasps, on the other hand, dig a burrow in which to deposit a single egg. “They put up lots of activity, they’re very curious, so some people misread that as an aggressive behavior. But you’d almost have to sit on one to get stung.” The male wasps aren’t even really capable of stinging.

Female cicada killers – as the name implies – lay an egg in a burrow which they’ve provisioned with one or two cicadas. Two, and she’ll lay an egg which becomes a female wasp. One, and the egg is more likely to become a male.