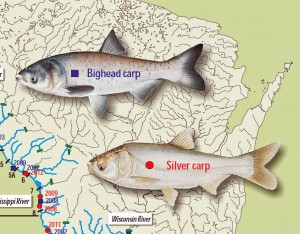 A new report from the Canadian Government paints an alarming picture for the Great Lakes, should invasive Asian Carp make their way into the lakes. “The report definitively answers the question, are the Great Lakes too cold for Asian Carp? The report simply says no. It is unusual to have a report that is that direct, that blunt and that simple,” said Andy Buchsbaum, who directs the National Wildlife Federation’s Great Lakes Office.

Buchsbaum said the report, issued by Fisheries and Oceans Canada, contains alarming findings. “As few as ten female and ten male Asian Carp are likely to result in a breeding population in Lake Michigan or any one of the Great Lakes,” he said. “The Asian Carp right now are moving faster than the government response,” he said. “Unless we pick it up, the Great Lakes and all of us are going to suffer.” Other findings are shown in the report summary.

The consequences could be devastating for native fish populations. Buchsbaum said an “all hands on deck” approach is needed to halt the carp at the Chicago area waterways which are seen as the most likely entry point. A spokesperson for Attorney General J.B. Van Hollen said the report underscores the need for immediate action. Wisconsin is part of a multi-state court effort to force steps to halt the fish before they enter Lake Michigan.