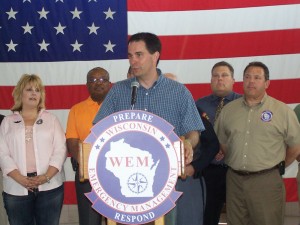 Governor Scott Walker is pledging to have “all hands on deck,” as the state tries to help Wisconsin farmers deal with a persistent and extreme drought.

The governor on Friday toured several farms and communities in southern Wisconsin that are struggling to deal with the dry and hot weather that’s been in place since early June, which has resulted in widespread crop damage and possible losses. Walker says state agencies and local officials are working together to develop plans for assistance.

The state is already pursuing federal disaster declarations in 23 counties, and Walker says additional areas will likely be added to that request. A state of emergency has been declared in all 72 counties because of the drought.

Governor Walker says they need to do everything possible to protect the state’s $60 billion agricultural sector. He says “farming is more than just an industry…it’s a way of life, so we want to make sure we’re doing all that we can to help.”

So far, 29 farmers have sought emergency permits to divert water for irrigation and the state is reviewing 22 expedited requests for high capacity wells. Walker says they are considering other possible measures that could provide some relief to farmers, beyond efforts to seek financial assistance from the federal government.

Walker says the drought will likely have a ripple effect on the economy, as lost crops and declines in dairy production lead to higher food prices. He says whatever resources the state can put in now could reduce the economic damages down the road.

Wisconsin Emergency Management has set up a website to help farmers and the general public find information related to the drought and possible assistance.