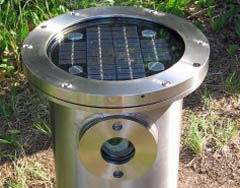 You still can’t get a traffic ticket based on remote camera surveillance in Wisconsin – but you can get one for transporting invasive species. Cameras are now in place at some lake landings in Wisconsin, recording thousands of hours of boats being taken in and out of the water. Bob Wakeman, Aquatic Invasive Species Coordinator for the state Department of Natural Resources, said the primary goal of the devices is to educate boaters on invasive species. “There is an audio that is played, when something passes in front of the camera,” he said. “So you get this voice that comes out of this box . . . that says “hey, FYI, clean your boats and trailers off before leaving the launch.””

For those who choose not to heed the message, the cameras also provide a record that can lead to a ticket. Eric Lindberg heads Minnesota-based Environmental Sentry Protection, which contracts with counties and lake associations to install the I-LIDS system at landings. “Some lake associations hire our company to review the videos for them,” he explained. The digital recordings can also be accessed on a website.

Boaters can be fined for failing to remove vegetation from boats and trailers, which allows invasive plants and animals to hitch a ride from one lake to another, hastening the spread of invasive which can threaten the health of lakes and their native species. “There’s 200 invasive species in the Great Lakes right now, and it’s very easy for a boater to move from Lake Superior to inland lakes, and it’s critical for the boater to take responsibility,” said Lindberg. He noted that the zebra mussel, originally an invasive species in the Great Lakes, has now made its way to 60 inland lakes in Minnesota.

“We have provided some funding for these in the past,” said DNR’s Wakeman. “We’re currently evaluating that policy. We just want to make sure we’re getting the biggest bang for our dollars, and that if these are going to be grant eligible, they’re going to be placed where they can be effective, and can be used for enforcement if necessary.”

Some agencies that have installed the cameras have also used the information gathered to reward boaters for doing the right thing. “In the first trial operation that we had, in Burnett County, we identified boaters that were cleaning off their trailers and boats, and forwarded those registration numbers to the sheriff,” said Lindberg. The sheriff’s department sent gift certificates out the boaters. “It’s not always about slapping the hand, you have to also acknowledge people’s positive behaviors, if you’re going to get compliance.”