You are here: Home / Military / Helping soldiers keep in touch 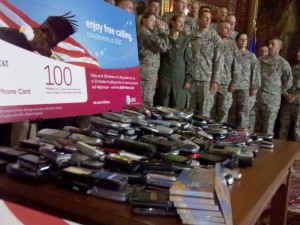 Old phones will be recycled to buy calling cards for US troops. (PHOTO: WRN)

Wisconsin residents are being urged to get involved in a national effort that helps deployed U.S. troops keep in touch with their loved ones.

Since launching in 2004, “Cell Phones for Soldiers” has sent over 150 million minutes of talk time to soldiers serving overseas. Charity co-founder Robbie Bergquist says their primary financing for the operation comes from recycling cell phones. The group is asking Wisconsin residents to help their efforts by donating their old devices.

Major General Don Dunbar, adjutant general of Wisconsin, says those gifts of talk time help soldiers stay connected with home. While helping to ease the concerns of troops and their families, Dunbar says “hearing from them a few times while they’re serving overseas can make all the difference.”

Governor Scott Walker says the charity is about more than just providing a phone connection because it helps troops keep a connection to home that “lifts up the morale of men and women in uniform.”

AT&T Wisconsin is donating 600 pre-paid calling cards to the Wisconsin National Guard and reserve units as part of the effort. The provider will also host drop off locations for old cell phones at its business locations around the state.