You are here: Home / News / High gas prices due to multiple factors 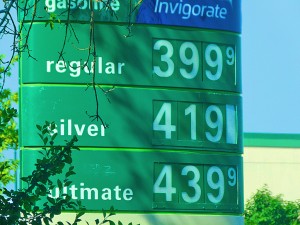 A Madison gas station charges $3.99 Friday morning — a 70 cent hike from just over a week ago. (PHOTO: Jackie Johnson)

It’s a perfect storm resulting in jacked up gasoline prices.

After noticeable declines in recent days, the price at the pump has spiked nearly overnight. Could $4.00 a gallon for regular unleaded gasoline be right around the corner? Erin Roth, Executive Director of the Wisconsin Petroleum Council, says he’s not into predicting prices.

“I can’t speculate. All I can tell you is that until all of these facilities that supply Wisconsin are back on line totally, and the Enbridge line has reopened, it will continue to have upward pressure on gas prices here in Wisconsin.”

Production problems at four of the five major refineries in the Midwest, high corn prices — and ethanol — from the drought, two ruptured pipelines in Wisconsin, and higher demand for the fuel are all contributing factors to the dramatic spike at the pump.

The Enbridge Energy pipeline ruptured in Adams County on Friday, spewing out over 50,000 gallons of fuel. The federal government, on Tuesday, put the kibosh on resuming operations until further evaluation. That has Roth very concerned.

“There is really no reason why the DOT and EPA can’t allow that restart to happen just as they did with the West Shore pipeline break north of Germantown.”

Roth says, keeping that pipeline closed hurts Wisconsin gasoline consumers, which he says is unfair. Analysts say a shaky economy and tensions in the Middle East are partially to blame for the higher prices. On Thursday, the price was $3.89 at at least one Madison station, that’s up 60 cents in just over a week.