You are here: Home / News / Hundreds gather at Sikh vigil in Fox Valley 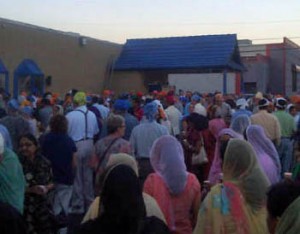 A vigil in honor of the victims of Sunday’s shooting in Oak Creek drew more than 300 people to the Sikh Temple of the Fox Valley last night. Priest Singh Balli is the leader of the temple in Menasha, and he says it means everything to know that so many people are standing with them.

In attendance was Gurjeet Singh Kaleka, who lost his uncle when 40-year-old Wade Page attacked the Oak Creek temple. He says when people from different faiths come together it helps with the grieving process.

Menasha Mayor Don Merkes says the community comes together in good times, and tragic ones. He says it was a great sign of unity.

Appleton Mayor Tim Hanna says the turnout shows the community welcomes different cultures. He says the sad thing is that it took the acts of one despicable person to demonstrate what people already know is here.

After a ceremony inside the temple, people gathered outside for a candlelight vigil and food.