You are here: Home / Packers / Is Driver a lock to make the 53-man roster? 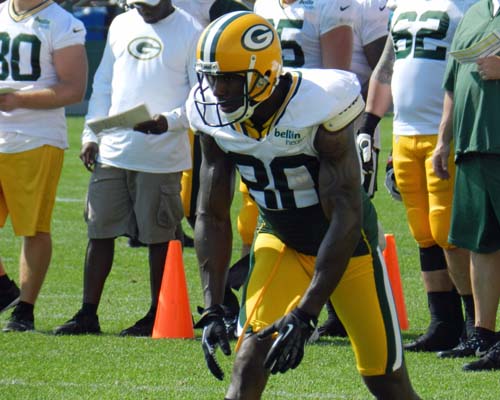 Veteran wide receiver Donald Driver may have restructured his contract, but is he a lock to make the Green Bay Packers 53-man roster a month from now? At age 37, Driver is having a good training camp so far.  He had another solid day yesterday, making a number of key catches and he continues to be motivated by those that think he’s done.

To some, it was a bit of a surprise the Packers decided to bring Driver back.  General Manager Ted Thompson was asked about that move earlier this week.

AUDIO: Ted Thompson on his decision to keep Donald Driver :12

Driver may or may not be a part of the Packers future, but there’s a number of reasons why bringing Driver back for another Training Camp was a good call.

When Ted Thompson has to make a decision a month from now, it won’t be easy.  Tori Gurley and Diondre Borel are both having good camps and will be hard to let go.  But Thompson and Mike McCarthy were smart to keep Driver to at least force Gurley and Borel to prove themselves during the preseason.

Injuries could also play a factor.  If somebody goes down prior to the start of the regular season, then the Packers will at the very least have some insurance with Driver.

Driver also proved last year that he understands his role and he’ll be ready to step up whenever necessary, just like last years playoff game against the Giants.

AUDIO: Driver is totally comfortable with his role :19

Gurley and Borel both got raises late last season to stay with the Packers after both received offers from other NFL teams to leave the Packers practice squad.

AUDIO: Tori Gurley on staying in Green Bay when he had other offers :23

Gurley has made a number of impressive catches so far in camp and has opened some eyes with his blocking.  He put on nearly 15 pounds in muscle and now stands at 6’4, 232 lbs.

Ted Thompson has gone with youth when making these types of roster decisions.  He has not allowed emotion to play a factor in his decision-making.

Thompson wouldn’t likely win any popularity contests if he were to get rid of Driver.  Driver is one of the most popular players on the team, especially after winning the title on “Dancing with the Stars”.  He’s captured the hearts of fans nationwide after the dance competition.

But Thompson won’t let popularity get in the way of making a difficult decision.  It’ll come down to whether or not Gurley and/or Borel are the real deal or not.  If Thompson determines that they can help the Packers now and in the long-term, then his decision will be a tough one.

Driver proved at age 36 that he could still play and there’s no proof that he won’t do the same at age 37.

Driver said he’ll continue to play as long as he feels good.  The question is, will that be for the Packers or some other NFL team?