You are here: Home / Packers / McCarthy thinks Harrell is ready 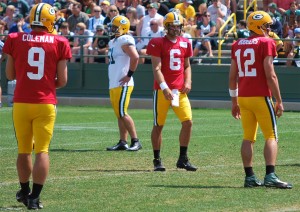 Green Bay Packers Coach Mike McCarthy stands firmly behind 27-year old quarterback Graham Harrell. McCarthy admitted he does not have a lot of playing time under his belt but, he does feel Harrell is ready.

AUDIO: McCarthy admits to Harrell inexperience, but thinks he is ready :11

Graham says he feels more comfortable with the offense this pre-season than last, and with every rep, his level of comfort rises. He also said last week felt like his first game with the second unit and offensive consistency will be better against the Browns.

Harrell, posting multiple NCAA passing records while playing for Texas Tech, went 15 for 27 in passing, threw for 135 yards and 1 touchdown last week against the San Diego Chargers. He hopes the second team’s performance from last week will carry over to this week against the Browns.

McCarthy is not the only one who believes Harrell has made strides, Aaron Rodgers believes Graham has a better understanding of the playbook and offense this pre-season compared to last year.

AUDIO: Aaron Rodgers says Harrell is becoming an expert in the offense :19

Harrell agreed with Rodgers’ statement and said, “…every rep you get in the offense makes you that much more comfortable.”