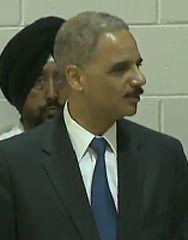 Thousands packed the gym at Oak Creek High School this morning as mourners from around the U.S. and several countries remember the six fallen Sikh worshippers killed by a gunman. Among speakers, Governor Scott Walker who cited the transcription on U.S coins “E Pluribus Unum,” translated “Out of many, one.”

“As Americans we are one, and when you attack one of us you attack all of us,” said Walker. “This week our friends and neighbors in the Sikh community have shown us the best way to respond is with love.”

Families of the victims spoke about their fallen relatives. “Mother was a good person, probably the most unselfish person to live, in my eyes,” said the son of Paramjit Kaur.

The son of temple president Satwant Kaleka, who died fending off the shooter, read from his father’s journal.

U.S. Attorney General Eric Holder said there are too many hate crimes against Sikhs happening. “It is wrong, it is unacceptable and it will not be tolerated.” Holder suggested laws may need to be changed while society figures out why “those so filled with hate” would commit these acts.

The service took place at Oak Creek High School. Afterward, mourners returned to their temple–the scene of the shootings–and started a traditional two-day ceremony to honor the victims’ memories.