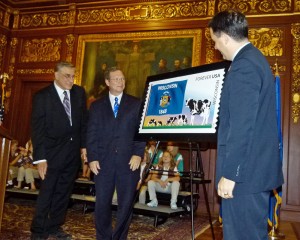 Governor Scott Walker and U.S. Postal Service officials introduce a stamp that commemorates the state of Wisconsin. The governor reminisces about his own stamp collection. “I’ve got a pretty good collection that was passed on to me from, not just my mother but my grandmother, so it’s probably worth a fair amount these days, who knows. But for us, it’s one of those great traditions that was passed on from one generation to the next.”

Lakeland District Manager, United States Postal Service, Charles Miller says it’s a privilege to pay tribute to the 30th state to join the union. “We are here to honor Wisconsin history, her beauty, and her contributions to our union. What better way to do that than with the sovereign symbol of our state, the proud flag of Wisconsin.”

The stamp design depicts the state flag waving over a field of cows grazing at sunset. Wisconsin’s “Forever” stamp is part of the postal service’s “Flag of Our Nation” series that commemorates all 50 states, the five territories, and the District of Columbia.

The stamp was unveiled during a ceremony in the governor’s conference room on Thursday in the state Capitol building.