You are here: Home / Packers / Packers get roster to mandated 75 players 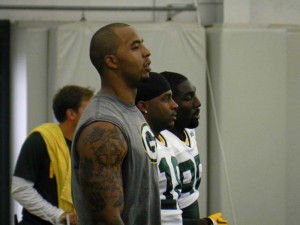 the physically unable to perform (PUP) list and they released two others to get to the 75-player roster limit today.

TE Andrew Quarless and OLB Frank Zombo will begin the season on the PUP list.

The Packers will host Kansas City on Thursday night in the final exhibition game, then have to reduce their roster to the final 53-man regular season roster limit by 8pm Friday night.