You are here: Home / Packers / Packers go under the lights! 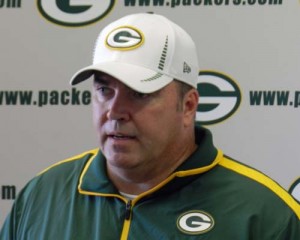 camp on Thursday and head coach Mike McCarthy said it had some good and some bad things.

AUDIO: Mike McCarthy says there was some good & bad on Thursday night :14

Mike McCarthy blew off some steam for the first time in this training camp after sloppy play.  He said the number of pre-snap penalties is unacceptable.

Although the offense has had more turnovers in the first week of camp, quarterback Aaron Rodgers has been sharp.

AUDIO: McCarthy says Rodgers is at the top of his game :19

Greg Jennings, who missed some time early in camp, had his best practice to date.  Jennings beat Devon House and CB Otis Merrill for TD’s, then hauled in a 60-yard TD pass.

Tonight’s Family Night at Lambeau Field starts with drills at 6:30 followed by the scrimmage at 7:30.  Mike McCarthy said he thinks it’s important for his team to have some live action.

AUDIO: Mike McCarthy on what he wants to get out of Family Night :23

Last years scrimmage was called off because of rain and storms.  The weatherman says tonight’s forecast is good and there will be football at Lambeau field.