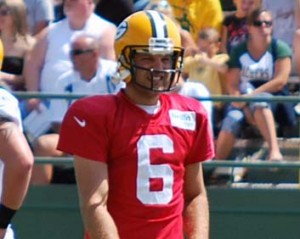 but they did fall to 0-2 with a 35-10 loss to the Cleveland Browns at Lambeau Field.

After the Packers forced a fumble on Cleveland’s first possession, giving the Packers the football deep in Browns territory.

Aaron Rodgers missed a wide open Jordy Nelson in the right corner of the end zone.  But Rodgers rebounded to hit Nelson two plays later from 20-yards out to put the Packers on top 7-0.

That turned out to be the Packers only touchdown on the night.

The Packers were on the move the next time they had the football, but Randall Cobb coughed up the football after a completion, the Browns recovered to squelch the threat.

The Packers still don’t know if Graham Harrell is good enough to back up Aaron Rodgers this season.  Harrell was 12 of 24 for 100 yards and 2 interceptions.  He led the offense to 1 single field goal in eight series.

Harrell won’t get as much of a look next Thursday at Cincinnati as he did this week because preseason game number three means more playing time for AaronRodgers.

Harrell struggled most of the night last night, but he was also going against Cleveland’s 1st team defense during the entire second quarter.  That provided an unfair matchup.

Harrell did struggle to make throws that were open.  That was a big part of his problem last week in San Diego as well.

AUDIO: Harrell asked if he went forward or backwards this week :14

The players will watch the film today and then take Saturday off before returning to work on Sunday.