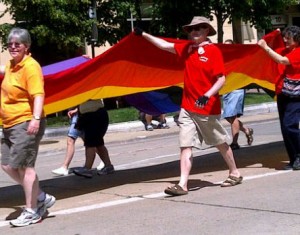 Gay pride was on display in Madison Sunday as several thousand gay-rights activists and supporters gathered for their annual parade around the Capitol Square.

“Hey-hey, ho-ho, homophobia has got to go,” chanted the crowd. “We need to come together and realize that America is ready for gay marriage; that’s why I’m here,” said a man at the rally.

They’re hoping it’s a big year at the polls for them with openly gay lawmakers from Madison–Congresswoman Tammy Baldwin and state Representative Mark Pocan–trying to win higher offices in November.

Pocan faces businessman Chad Lee in the U.S. House race, while Baldwin will face off with former Governor Tommy Thompson in the U.S. Senate run.