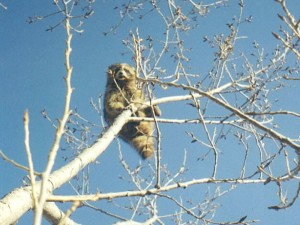 While they are often known for causing some mischief, raccoons have apparently been stirring up a little extra trouble this summer for residents across Wisconsin.

The Department of Natural Resources says it’s seen a jump in complaints this year from property owners reporting damage by the animals. Wildlife Damage Specialist Brad Koele says they have received calls about raccoons destroying bird feeders, along with causing more significant damage to crops.

State law allows property owners to shoot or trap raccoons. If using live traps, Koele says the animals must be released on private land with the permission of the property owner. It is illegal to set them loose on state owned lands. State law does ban the use of poison to kill raccoons, because of the danger to other wildlife.

Getting rid of problem animals may not keep others from showing up though. Koele says sources of food are what tend to attract the animals the most, so removing those should be a top priority. If they manage to make their way into an attic or barn, sealing up the area should also be a main concern. Still, Koele says the animals are well known for getting into areas regardless of the obstacles put in front of them.

The state does not track the size of the raccoon population, but Koele says the increase in complaints points to a possible increase this year.