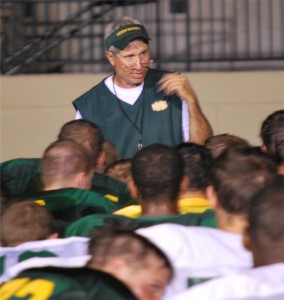 The St. Norbert College Green Knights get a once-in-a-lifetime opportunity to travel to Ireland this week to play football.  We’re not talking about the European version of football either, also known as “soccer” in the U.S., but American football.  They will compete against Ohio’s John Carroll University this Friday at 1:30 pm CDT in South Dublin at the Donnybrook Stadium.

This game along with six other games, including Navy vs Notre Dame on Saturday are part of a huge weekend of American football in Ireland which, according to Green Knight’s head coach Jim Purtill, is being promoted and treated like the Superbowl.

The general feeling from the Green Knights team is, while this is an amazing opportunity, the game against John Carroll University is the primary focus and everything else will come after the game.

Coach Purtill reinforced this statement when asked about St. Norbert College’s expectations, he said, “…[our] expectations are to win the football game.”

Purtill also commented on the atmosphere that is expected while in Ireland during their time there. 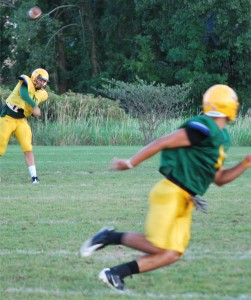 This will be the first big game for sophomore James Tringali, who replaces the graduated Mike Fabrizio as quarterback.  Tringali may not have the same experience as Fabrizio,
but he has the confidence and praise from his teammates and coach Purtill.

Audio: Coach Purtill on Tringali and all QBs :16

Senior running back Austin Williams is another player who’s making a return to a big game. Williams, who was sidelined by an injury last year, has high expectations for the Green Knights this Friday and for the rest of the season.

Information on how to watch the game can be found on a press release issued by St. Norbert College, which can be located here.