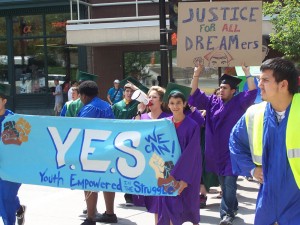 Students march to the Capitol in support of changes in immigration law. (PHOTO: WRN)

A change in federal policy could help undocumented children brought into the country by their parents go to school and find a job without the fear of deportation. The new policy was brought about by an executive order from President Obama, which allows children who have lived in the country more than four years, but lack legal citizenship, to apply for a deferred action work authorization.

Supporters of the change marched Wednesday on the state Capitol building in Madison, chanting “thank you” slogans to the president and also calling on Congress to act on comprehensive immigration reform that provides a path to citizenship. Among them was Gerardo Alvarado, who came to the US from Mexico at the age of six and is now a junior at the UW-Milwaukee. He says the deferred action policy opens new doors for him, as he studies to be an accountant.

If his application is approved, Alvarado says it would allow him to apply for internships at major companies and pursue a career after graduation. Before now, he says his future after college had been very uncertain and notes that many of his friends in similar situations gave up on pursuing an education because of the poor career prospects.

Critics of the change argue it ignores immigration laws and provides a type of amnesty to those who are living in the country illegally. Alvarado disagrees, saying the policy is more of an acknowledgment that children who grew up in the US have a desire to work and learn, but their citizenship status makes it almost impossible.