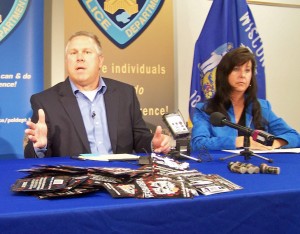 Law enforcement agencies in Dane County issue a warning, about synthetic marijuana. Sold as incense, with colorful packaging and names like Mad Hatter and Happy Hour, synthetic cannibinoids may appear to be legal products. They are not. “There is no quality control. There’s no way of knowing how much of the chemical you’re getting, or exactly what chemical you’re getting. It’s a real unknown,” said Madison Police Department Lieutenant Brian Ackeret, who leads the Dane County Narcotics & Gang Task Force. “I think one of the biggest problems is, it looks like it’s a professionally manufactured and distributed product, and it’s far from that.”

Last month, members of the task force seized some $64,000 worth of synthetic marijuana being sold at gas stations and head shops. Ackeret believes the recent seizures represent “just the tip of the iceberg,” and is a statewide and nationwide problem. He said some retailers are aware that they’re selling an illegal product. “It’s hidden behind the counter, you have to ask by the special name. Some of them are not ringing it up on the regular register, they have a separate cash box. So some of the retailers are well aware that its an illegal product and choose to distribute it anyway.” 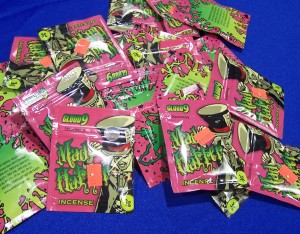 At prices ranging from around 12 bucks to as much as 45 dollars, that can mean thousands of dollars in profits for gas stations and head shops. As for users of the drug, there can be some nasty consequences. “People are having heart palpitations and strong hallucinations,” according to UW Police Department Detective Carol Ann Glassmaker. “It’s affordable, and a lot of the people out there are thinking “well, why would I want to go to a drug dealer when I can go to my local gas station and purchase this?” The price might be a little higher, but they’re thinking it’s a legal substance.”

The federal Drug Enforcement Agency has cracked down on the illegal marijuana in a national campaign called “Operation Log Jam” which included efforts in Madison, Milwaukee and Racine. Ackeret said retailers in Dane County need to know that the drugs are illegal and that they may face prosecution for selling them. “We want to let parents and potential users know the project is illegal, despite what it says on the packaging,” he said. “Every Dane County retailer, we want to put on notice: these products are illegal. We will seize them, and you may face prosecution.”