You are here: Home / Packers / 49ers too much for Packers in opener

The San Francisco 49ers showed dominance at times on both sides of the ball, 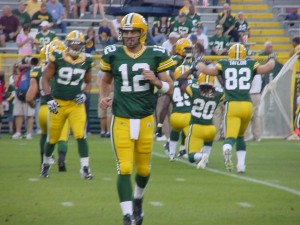 knocking off the Green Bay Packers 30-22 at Lambeau Field on Sunday.

The 49ers defense held the Packers to 45 rushing yards, just 18 (9 carries) for Cedric Benson for a 2 yard per carry average.

On the opposite side of the line, the 49ers offense rushed for 186 yards, averaging 5.8 yards per carry.

The Packers pass rush was better than last season, but when push came to shove, they couldn’t stop the run.

Adding insult to injury was the best quarterback in football made mistakes that he just doesn’t make.

AUDIO: Aaron Rodgers is disappointed with his play :19

The Packers were penalized 9 times in the first half and 10 times for the game (77 yds).

It’s one game and nobody’s panicking.  But Alex Smith outplayed Aaron Rodgers and the 49ers outplayed the Packers.  It’s San Francisco that struck the first blow in a game that featured two of the league’s best teams.

There’s a long way to go, but if there’s anything this game showed on Sunday is that the 49ers, at the moment, are the best team in the NFC.  The Packers will have between now and the end of the season to prove they can give the 49ers a good run for their money.