You are here: Home / News / Baldwin and Thompson debate (AUDIO)

Tommy Thompson and Tammy Baldwin had their first U.S. Senate debate Friday night. The candidates sparred on a variety of issues, but of particular interest for many in Wisconsin, what they had to say about the future of Medicare. “My opponent supports a plan to end Medicare as we know it, to instead give seniors vouchers,” said Baldwin, a Madison Democrat who’s served in the House of Representatives since 1998. “We need to continue the reforms in Medicare that we implemented in the Affordable Care Act that has extended the solvency of the program by nearly a decade. We need to do more of that.” 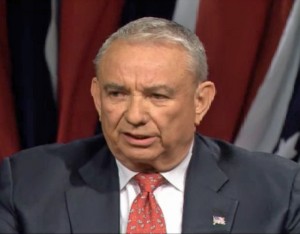 “It’s amazing to me that she even has the audacity to say that I did this. I’m not even in Congress” said Thompson, the former Republican Govermor and Bush administration Secretary of Health and Human Services. “We’ve got to protect Medicare.” Thompson said Medicare needs to be “modified” – he didn’t mention vouchers – and that later, seniors be included in the same federal health program which provides insurance for members of Congress like Baldwin.

How to deal with the federal deficit? Thompson called for passage of a balanced budget amendment. “And then we’ve got to request that every federal agency comes in with a five percent reduction from what they got the previous year, and give the secretaries the opportunity to get rid of programs that don’t work. Nobody in Washington ever gets rid of anything,” said Thompson. “I would get rid of the sweetheart deal that Tommy Thompson negotiated when he was head of Medicare, that makes it illegal for Medicare to bargain with drug companies for better prices for seniors,” said Baldwin, who also suggested several other specific cuts.

Baldwin is a “taxer and spender” said Thompson, with a poor record of bipartisanship. “Even her party doesn’t pass any of her legislation, because she is so far out there. She’s not in the mainstream,” he said. “Some may not believe that Tommy Thompson once signed into law a Tammy Baldwin-Scott Walker bill,” said Baldwin, who served with the current governor in the state legislature. She said she’s worked with Republicans during her time in Madison and Washington.

The candidates were asked how they’d assure the long term solvency of Social Security. “We need to make sure that Medicare and Social Security remain bedrock foundations,” said Baldwin. “Social Security is not contributing to our debt. We should leave it alone and make the appropriate changes to contribute to its solvency.” Thompson noted that Baldwin has been in Congress for 14 years. “Has she ever introduced any legislation to fix Social Security? No. They’re going to stand around and wait ’til it goes broke.” 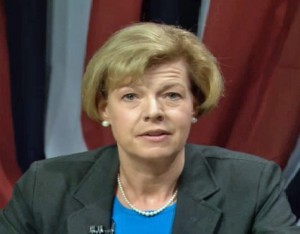 The candidates also ventured into foreign policy, on questions about possible U.S. military response to Iran’s nuclear ambitions, and the future of U.S. forces in Afghanistan. “It’s time for us to draw the red line, and say ‘no more Ahmadinejahn, we are going to stop, and you are not going to have a nuclear bomb.’ We cannot afford to allow that individual, and that country, to have a nuclear bomb.” While Thompson had trouble pronouncing the name of Iranian President Mahmoud Ahmadinejad. Baldwin struggled with her choice of words. “I also would never frivolously – not quite the right word – I would never send our men and women into harm’s way without an exit strategy and assurance that we are going to be effective.”

Neither candidate commented on the fact that – on bringing U.S. troops out of Afghanistan – they essentially agreed for the only time in the evening. “It is now time for them to come home,” said Baldwin. “We need to get out of Afghanistan now,” said Thompson.

Same sex marriage is an issue which has been decided in Wisconsin, said Thompson. “Seventy-one out of the 72 counties voted for a constitutional amendment in Wisconsin . . . that same sex marriage is not legal in the state of Wisconsin, and I support that. It’s an issue that’s left up to the states, and that’s where it should be.” Baldwin said the issue is still being considered voters. “I recognize what the voters of Wisconsin decided back in 2006,” she said. “We know that every year people are thinking about this issue and changing their minds.” On abortion, Baldwin said she supports the rights confirmed by the Supreme Court’s Roe versus Wade decision, and wants abortion to be “safe and rare.” Thompson said he has always been pro-life, but does support exceptions for the life of the mother, and on rape and incest.

Friday’s debate at Milwaukee Area Technical College was sponsored by the Wisconsin Broadcasters Association. Baldwin and Thompson are scheduled for just two more debates prior to the November 6th election.