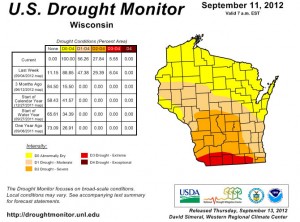 For the first time this year, the drought of 2012 has now touched all of Wisconsin.

In its latest report, the US Drought Monitor says the entire state is now rated as abnormally dry or worse. It marks the first time the entire state has been under some sort of drought designation since extended dry periods started in June.

The drought map of the Badger State now shows abnormally dry conditions in the entire Northwoods area, in a line running from Manitowoc to Turtle Lake. The rest of the state is still in a moderate or severe drought, despite scattered showers and thunderstorms that have swept across Wisconsin in recent weeks.