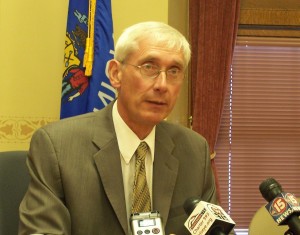 The state’s schools superintendent said Thursday that Wisconsin teachers feel beleaguered. During his State of Education address at the Capitol, Tony Evers said the state of public schools relies on strong teachers – but teachers now feel they’re under fire. “Over the past year and a half, the contentious state budget dialogue has been driven to the local level, and put targets on the backs of our teachers and public servants,” Evers said. “Reasonable people can disagree about how the budget is balanced and about the necessity of Act 10. But every citizen in Wisconsin should feel alarmed when teachers don’t feel valued and respected by their communities and their state.”

Later, speaking with reporters, Evers stopped short of criticizing Governor Scott Walker for the atmosphere. “It’s difficult for me to sit in his shoes, given what’s happened,” he said. “I wouldn’t want my grandchild going to a classroom with a teacher that is feeling just absolutely a target. You wouldn’t want that in private industry. Our teachers have to feel good about what they’re doing, and be respected.”

Evers, a Democrat, called for reinvesting in public education in the next budget, and fixing the state’s broken school funding system. “We’ve all heard the claims that past cuts did no harm, and somehow even helped,” Evers said in his address. “I’m here to tell you today that’s not the case.”

“I think it is time to take a look at how we distribute the funds we have, it’s patently unfair,” Evers said during his media availability. State Senator John Lehman of Racine is a Democrat and current chair of the Senate Education Committee. “There are problems that could be fixed by looking at the school funding formula, rather than putting more money into the pot,” Lehman said. “All of us are challenged by the biggest education cuts we’ve seen. Hopefully we won’t ever see what we saw in this last two year period. The schools are really struggling now.”

Evers also highlighted proposals contained in his Agenda 2017 plans. Those items include boosting high school graduation rates and increasing the readiness of graduates to pursue additional education, increased school test scores in the elemetary grades, as well as overhauling the school funding formula.

Much of the education agenda in the coming legislative session will be contingent on what Governor Scott Walker wants to see happen. “Transforming education will continue to be one of Governor Walker’s top priorities in the next state budget,” said Walker spokesman, Cullen Werwie.