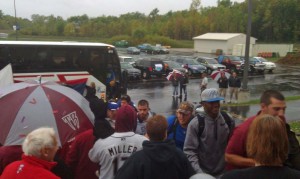 afternoon at the 2012 Midwest League Champions.  The Timber Rattlers earned that title for the first time, wrapping up the best of 5 series with Fort Wayne, three games to one.

The eight previous baseball titles won by a professional baseball team in the Fox Cities were all won by the Appleton Foxes.  The Foxes last won in 1984.  They became the Wisconsin Timber Rattlers in 1995 with the first title for the Rattlers coming this past weekend.

First baseman Nick Ramirez will likely move up in the Brewers farm system next season, but he said he’ll never forget the journey that led to this championship.  He also won’t forget the text message he received from Milwaukee Brewers general manager Doug Melvin and team owner Mark Attanasio, congratulating him on the championship.

AUDIO: Nick Ramirez on getting a text from Doug Melvin and Mark Attanasio :14

The championship is also special for Timber Rattlers manager Matt Erickson.  He grew up in Appleton and still lives there with his family, year-round.

Erickson and some of his players will soon head west for another month of baseball in Arizona as part of the Brewers’ fall instructional program.